Trails to the Farm, Part 6 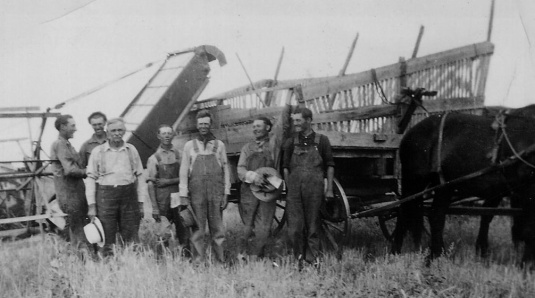 Eventually, the eldest son, Charles Henry, became “of age” and left the farm to begin teaching and preaching.  Those professions led him to a young lady named Adella Gates and they married, continuing to serve in those capacities until they moved about 12 miles southeast of the old family farm.  Then, Charles added farming and writing for the Larned Chronicle to his daily routine.  In all, twelve children were born to that union with the eldest son named…yep, you got it…Charles Chester Silas.

Chet, as he became known to the surrounding communities, was a hard-working boy.  At five, he got up with his father, went to the barn, hitched up the horses and readied the wagon for his father’s daily jaunt to the schoolhouse.  He was an “in-charge type of guy”.  As he got older…around 9…he helped with the wheat harvest which involved grinding toil from dawn to dusk. In time, he was in charge of most of the farming so his eleven brothers and sisters could go to school.  He did not have that great privilege.  But he could never be classified as ignorant!  The man “knew” more that many highly educated folks I’ve met in my life.  He could build anything, run any machine and repair it, figure in his head numbers that most of us need calculators for.  He married a local girl, Viola Leonard and soon had a son named….yep, Charles LeRoy.  They purchased  a little farm eleven miles west in Hanston from a widowed pioneer lady named Mrs. Emma Perry, whose story is a book waiting to be written!  Time passed and Chet was able to purchase more land adjacent to the Perry Place and LeRoy grew up.  He grew up so much and so tall that colleges were pursuing him to play basketball for them.  It seems there was no contest  though.  He was born a farmer, raised a farmer and all he wanted to do was farm.

After LeRoy’s marriage to a hometown girl, LaVanche Korf, they moved out to the Perry Place into a small frame house that stood a few hundred feet from the dugout that Mrs. Perry’s hired help lived in many years earlier.  And it was there that a baby boy came to their home and he was named…ready?…of course, Charles Ronald.  They lived out in the country until Ronnie, as they affectionately called him, was about two years old and then moved into town.  Actually their new house was town in front, country in back!

LeRoy and Chet farmed side by side for years, adding a bit of land here, a bit of pasture there and their farm grew.  As did the family.  A second son, Lonnie, came and by then, there was plenty of work to go around.  Planting in the spring, wheat harvest and irrigating in the summer, wheat planting in the fall and always, lots and lots of maintenance on tractors, irrigation wells, engines, tools, trucks, building of sheds…and cattle.  Cattle called for pens and fences…and medicine and pen cleaning and corn and planting of corn and harvesting of corn and sorting and moving…..the list goes on and on.

Ultimately, the farm became something different.  Something that took many men to run.  And so, after Ronnie’s marriage to a Texan, Deborah King, the opportunity was presented to him to come back to the farm.  Which was not any easy decision because by this time, Ronnie had graduated from a small Southern Baptist college, Howard Payne University, and was a successful girls basketball coach in West Texas with coaching offers coming in from colleges and larger high schools.  But the call of farming won out, as it did with his dad, so Ronnie moved his family of a wife and two little boys, Travis Charles and Brad Thomas, to Kansas.  And the wife left her family in Texas.  And sometimes cried when letters came and phone calls were answered and felt much like Clementine did during her long years on the prairie.  It all came around full circle.

So that made six generations of Charles Ruff’s in Hodgeman County…not on the same farm that Charles had settled 134 years ago, but close by and in the same county.  And the farm has grown larger and more cattle populate the pens to the north of our home.  But the battles are the same as they were 134 years ago…government interference, high taxes, disease, drought, blizzards, floods, tornadoes, low prices and on and on.  But you know what?  We wouldn’t live anywhere else.  Just think of all the starscapes we’d miss in the middle of August.  And the snow sledding in December.  And the fireworks in the pasture in July (if it’s not too dry!). And the meadowlarks singing spring in. And the smell of fresh air. (as long as the wind’s not coming from the north…that’s where the cattle reside!) And the freedom to stick your head out the front door and holler at the top of your motherly lungs for kids to come to lunch.  And kids who know how to play in the dirt.  And eat it.  And throw it at each other.  And grow stuff in it.  Yep, they’re farmers too. It’s kind of in the gene pool?!

By the way and I know you’re probably not going to believe this, but there are three more little boys named Charles running around the farm, Braeden Charles, Charles Garrett and Mac Charles!  They are the seventh generation of Charles Ruff’s living in the county.  Too much of a good thing?  Just ask the fellers at the Co-op…

2 Responses to Trails to the Farm, Part 6