Doing it the hard way

Continuing the “farm” theme, the first article was written about 1900 by Charles Chester Ruff, the patriarch of the family.  He was writing to the editor of his hometown  newspaper back in Pennsylvania, describing the farming conditions of western Kansas.  His letter to the editor appears as he wrote it with my italics, inserted for emphasis.  The farming techniques of 1900 are contrasted with thoughts from Big Boss in the second article, which is in italics.

Charles Ruff, is a former resident of this city, who moved to Hodgeman County,Kansas, about twenty-one years ago. In a letter to his brother-in-law, John Pugh of Mill Street, writes interestingly about Western farming, etc. We are permitted to print a few extracts from a recent letter:

The Wilkes-Barre Record, which you send me, is more than welcome. I had no idea that such an excellent paper was printed outside of the larger cities. This is a county of extremes, not only in politics, but in everything else. We either have 80,000 Republican majority or the Pops beat us: we either have immense crops or none; rain nearly every day or drought. Our home is in the Pawnee River Valley. The surface is as level as a floor, soil is sandy, four feet deep, and very rich. In fact the soil is thirty feet deep, being black for the depth of four feet, and gradually getting lighter. We strike water at thirty feet. I have two wells near the house and both my pumps are run by wind power. Farming is much easier than in Pennsylvania. Our plowing is done with a sulky or gang plow, pulled by from three to six horses. I turned over three acres yesterday. Cultivating is done with a riding cultivator. We cut our grain with a header, which cuts twelve feet wide, or a binder that cuts and binds at the same time. It takes six men to run a header and five teams, three teams to the header machine and a team to each barge. Some claim to cut forty-five acre per day but thirty acres is considered a good day’s work. We do not broadcast sowing. All grain is planted with a drill. I have drilled 160 acres myself with one team. My summer crops consist of barley, corn, sorghum and Kaffir corn. Threshing is most dreaded of all. It takes fourteen men to run a machine and it is all done with steam power. If grain is well filled and in good condition a crew will thresh from 800 to 1,500 bushels per day. In 1892, I threshed 2300 bushels in two days. I have raised as high as thirty-five bushels to the acre. Last year I got but three and one-half, the other extreme. An average crop is about twenty bushels. This is not a corn county. We do not get enough rain as a general thing. Fifty miles east of here commences the corn county, where they raise from sixty to eighty bushels to the acre. I think in time we will be able to raise better corn, for I think as the land is broken and put in cultivation we will have more rain fall. 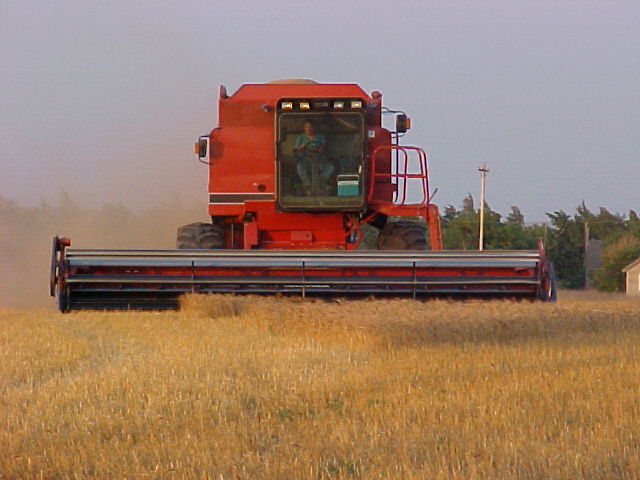 The following article was written by Big Boss aka CRR, my husband.  He discusses only a few contrasts between farming in 1900 and today’s technological farming.

We have the letters. Love letters. Civil War correspondence letters written by a boy to his girl–a boy who enlisted at age 16–who first carried a drum and traded it for a gun, and survived battles at Gettysburg, Manassas, Fredericksburg, and was Appomattox Courthouse when Lee surrendered. He was a survivor–and his decision to come to Kansas is why we are here today. Some things never change–the fear of a coming storm, too much rain, too little rain, the violence of a relentless blizzard, the absence of snow cover when sub-zero temperatures come causing winter-kill to the planted winter wheat crop. Too cool in the spring–too hot in the summer–both devastating!

Some things do change, and change dramatically. You’ve read the Wilkes-Barre Record article written by my great-great-grandfather. He told you how he worked the fields, planted the crops and harvested the grain. Now let me tell you how we do it.

We work the ground with all-wheel drive tractors, pulling implements up to 52 feet wide. They are equipped with GPS guidance systems to maximize the total width of the implement in tow. We strip till–we pull a strip tillage implement across a corn field, tilling a strip about 8 inches wide every 30 inches. This leaves the center of the rows undisturbed, cutting down erosion. The practice is called minimum tillage. It saves lots of fuel. We pull a 12 or 16 row planter down those strips, guided by a GPS system allowing for exact placement of the seed in the center of the strip. We can plant 15 to 20 acres per hour–one farmer!

We irrigate the corn field with a center pivot irrigation system. Our sons can check the exact location of each pivot any time of the day or night with their cell phone. Diagnostic technology allows for immediate cause of any malfunction of the equipment as well.

When we harvest the corn, we can chop it in 9mm chunks–the whole plant that is–with a German-made forage harvester. This machine can gather in 10 rows of corn as it passes through the field, chopping and blowing corn silage into a truck at the rate of 6 tons per minute! (yes, that is 200 pounds per second!) Grandfather would be stunned–not only at the machine, but at the crop–which can produce 35 tons per acre. We harvest 20,000 to 30,000 tons per year. Takes about 10 to 14 days, working 11 to 12 hour days. 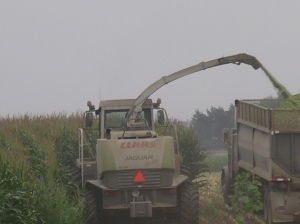 If we elect to harvest the corn for grain, we can do it with a combine with a header that will take 12 rows, has a grain tank that will hold 330 bushels and will harvest faster than we can plant the crop–if we have enough grain carts and trucks to allow the combine to run continuosly by unloading the grain on the go. If the machine is  harvesting wheat or milo, the header is 40 feet wide and will harvest up to 7,000 bushels per hour! Oh, by the way–one farmer operates the machine–it doesn’t take 14 guys to run the thing. The cab of the combine is 132 cubic feet–has GPS and field mapping technology to determine the best areas, and the poorest producing areas of each field. It also has a computerized grain monitor, giving exact bushels per acre being harvested as the machine proceeds through the field. What does this combine cost? You can own a combine, outright cash for under $400,000–but you can’t own the corn silage chopper (pictured above) for that! Oh–I forgot to talk about the field yields. Average years now produce corn over 200 bushels per acre–and irrigated wheat from 60 to 100 bushels per acre. Grandfather would be amazed!
CRR

To give you an idea of what the new wheat combines can do, check out the below video.  We had one demonstrated on our place last summer.  More on the harvests around here coming soon!

6 Responses to Farming Then, Farming Now