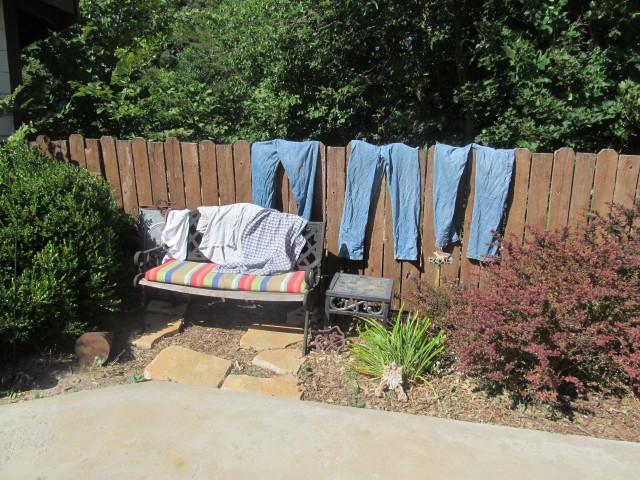 If my mama could only see me now!  She would flip out completely.

What?  You don’t see anything wrong here?  Oooo my mama would.  Big time.  One of the choicest tidbits of my home economics education…(on this, I was home schooled.  Never even heard of home schooling at that point!) was you never, EVER hung your laundry on the fence for the whole world to see!  Ever.

You see, she grew up in the country…waaaaay out in the country.  Where sometimes neighbors, because they were far out in the country too, hung their wash on their fences.  THIS was a thing NOT to be done.  Tacky, just tacky.  Years later when I was old enough to remember, we would drive to relative’s in the country and on the way, we’d pass a home…with wash on the fence… and she’d say, “Just look at that.  They’ve done their wash again. Tacky.” And tsk, tsk all the way to my Grandma’s house. Always cracked me up because I didn’t see anything wrong with it.  Heck, they lived in the country, so very few, if any, people saw their laundry mishaps!  And did those people hang their laundry on the fences because they had run out room on the clothesline or did they even have a clothesline?  Then, as quickly as these thoughts raced through my head, they were gone.  I was a kid.  Kid’s don’t worry about things like that, do they?!

So it was drilled into my head that if the good Lord was wise enough to give us clothes lines, we were to put them to good use.  This applied even after the advent of clothes dryers.  She still hung her sheets out on nice days because nothing smells better than freshly washed and line-dried sheets.  I totally agree.  See?  I did learn something!!!  Besides, as a kid, I thought it was huge fun to hide in the sheets or play like they were walls in my playhouse!

As a matter of fact, one of the first requests I made of my new husband was could I please have a clothes line?  I got it.  And when we moved to West Texas, once again a clothesline was put in place beside our little mobile home almost as soon as we got the trailer tied down. Then the mobile home was moved to Kansas, where a clothesline was installed immediately.  Yes, I had a dryer by that time, but like my mother, I really loved having fresh line-dried sheets, pillowcases, quilts, bedspreads and mattress covers.  About once a month the whole bed was stripped down, from top to bottom…the sheets were laundered once a week otherwise.

And when diaper rash made an entrance into our home, the cloth diapers were washed in bleach and then hung on the line.  My pediatrician said it was the best way to sanitize diapers so my little darlin’s could go diaper rash free!  (I loved that man and believed everything he told me.  Actually, it was as hard to leave him in Texas when we moved to Kansas as it was to leave my parents!!  He was an angel and how anyone could raise a child without him was beyond my comprehension!)

Anyway, as soon as we completed our brand spankin new real rock house, we moved out of the mobile home that leaked snow the previous winter.  I was ready for a  solid house that had a basement after ten years of mobile home living!  And,  I got a new clothesline!  A 3 liner.  Wow, could I load that thing up now!

In the process of raising 3 boys, I used the clothesline a lot!  Being my economical self, I’d hang most everything out there until it was just damp, then bring it all in and run them in the dryer 10 or 15 minutes to take wrinkles out and soften them up a bit.  Blue jeans can be a little “stiff” when completely dried outside!  And some days here you could dry the thickest jeans in 20 minutes flat what with the winds we have!

Then all of the boys left home and it was just me and Big Boss again.  Only now, Big Boss had his own bathroom out in the garage.  (That’s a whole other story!) And his own washer and dryer. But…he doesn’t like running the dryer, especially in the summer. So the above photo is what happens because it’s closer than the clothesline on the other side of the house.  He just slings them over the  *GASP* fence.  Some days, the fence on the left, right and beyond are covered in his wash…mainly jeans, underwear, work shirts and socks.  Occasionally, we have to retrieve them from the other side of the fence on a windy day. Once I found a pair of underwear out in the driveway, much to the Schwann’s man’s curiosity.  We were loading up on ice cream and frozen yogurt at the time.

I make sure he doesn’t do this dastardly deed when my mother visits though.  She would be appalled.  And she would say, “Well, for Pete’s Sake, it looks like the ………..s live here!” and shake her head.  I know, I know.  She raised me better.  But she missed out on Big Boss totally!!!  Doesn’t bother him in the least. And at last, I am living on the edge.  Completely ignoring my upbringing and becoming a rebel at the ripe old age of….nevermind.

Any day now, you may find me strumming a guitar while singing “Puff the Magic Dragon”….:)

And imagine my dismay upon hearing that some communities have banned clotheslines. REALLY?  Why? I thought it was cool to be environmentally sound and smart and save energy and all that.  Seriously.  It messes up the neighborhood?  Well, possibly, if you listen to my mama!  G-d bless her heart!  I love you mama!! She is a woman ahead of her times.

This entry was posted in farm and tagged Big Boss, clothesline, laundry, Mother. Bookmark the permalink.

9 Responses to I am a Rebel!