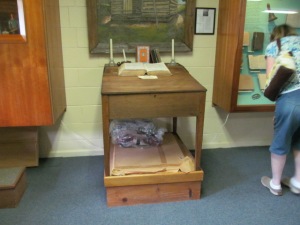 Besides visiting the Museum of Appalachia on a warm July morning, ChristyFesters went to Sam Houston’s schoolhouse where we learned about the Tennessee/Texas hero. As a child I, like every  other Texas school child, sat in awe at the very mention of Sam Houston’s name. Images of the Alamo, San Jacinto, Davey Crockett, all names held in great reverence, played in my mind.  Our neighborhood kids regularly reenacted The Siege of the Alamo.  I still tear up watching John Wayne’s Alamo and reading Marquis James’ The Raven still moves me.  Add The Bugles Are Silent by John R. Knaggs and you have a perfect mix of legend, facts and possibilities! The memory of my first visit to the Alamo in San Antonio was almost spiritual.  I’ve heard others describe their initial visit to the mission in the same terms.  Can’t put my finger on it, but when I step into the building, it’s almost as if I’ve entered hallowed ground.  Just weird.

Fact is…I was intrigued to the point of searching out my family histories to see if by some stroke Divine plan, I might have an ancestor who fought at the Alamo.  No such luck, but I did discover a direct branch of ancestors who were among the first settlers in Texas and actively participated in the foundational growth of the state. Hey, I could even join up with the Daughters of the Texas Republic! 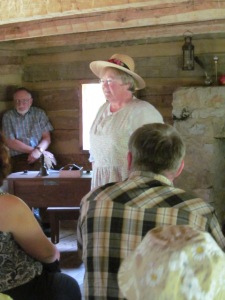 Our lovely guide telling how some brass knuckles were found between the chinking of the logs above the door..seems Sam may have had some unruly students!

Back to that hot Saturday afternoon…those of us attending ChristyFest, sat listening in a log cabin schoolhouse to a wonderful lady telling us how Sam Houston began his brilliant career.  How he was not only President of the Texas Republic, but had also served brilliantly in the military for the US and Texas and was also a US Representative, Governor of Texas and Tennessee. I always knew Sam Houston was giant in Texas history but what I’m not sure I realized until that day is what a truly colorful character he was!

Sound interesting?  He is.  Get a book (The Raven would be a good start) and read about him.  Whether you’re a Texan by birth or by adoption (you were smart enough to move to Texas.  Old sayin’: I wasn’t born in Texas but I got there as fast as I could!) 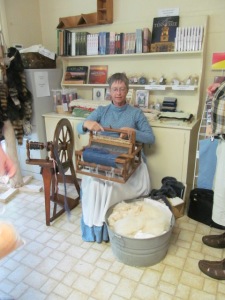 Demonstrating the use of a lap weaving loom

The volunteers at the Sam Houston School House set up a weaver/spinner who demonstrated the fine art of spinning which was fascinating.  Did you know that back in the day, the wool from the belly of the sheep was shorn off and used as mulch for gardens?   Seems it was too nasty to use for anything else.

Here’s a demo of spinning wool…just a short blurb but if you’ve never seen someone spinning, it’s a good representation:

2 Responses to Spelling with Sam