Yes, another Hobbit review, whether you like it or not! (Spoilers lurk here) 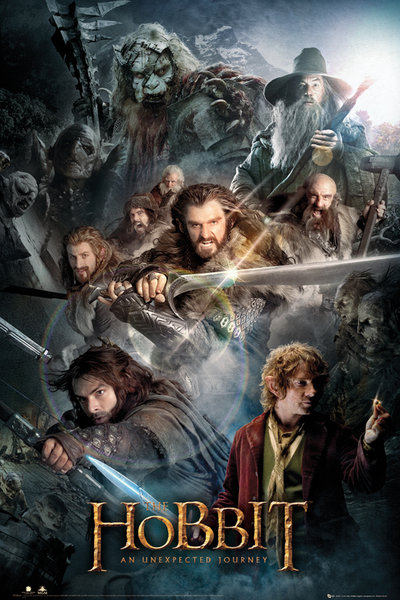 It was a completely innocent coincidence.  Really.  I was fresh off my NYC trip and was frantically trying to catch up on Christmas shopping and decorating and baking…and programs!!  There just wasn’t enough of me to go around.

So there I was in the Big City last Friday, checking my list more than twice but making progress.  I headed into the Mall to check out necklace chains as Big Boss had met me at the airport with a beautiful piece of jewelry from our family’s favorite designer and it needed a sturdy chain. Nice way to end a trip huh?!

As I entered the Mall, lo and behold…there flashed before my wondering and wandering eyes the showtimes for….The Hobbit!!!!!  I had NO idea it was already showing in the Big City!!  Oh I knew it opened worldwide on the 14th but to be honest, I had lost track of dates.  Completely.  The time was 1:15.  The 24 frame 3D was beginning at 1:45.

I checked my list one more time.  Yep, I had pretty much scratched off everything on it.  That did NOT necessarily mean that I was officially ready for Christmas tho.  It just meant that the list for that particular day was completed.  Yay for me.

Because it didn’t really matter.  I was already searching for that $20 bill I had stashed in the depths of my purse during the NYC trip..for emergencies.  And THIS WAS AN EMERGENCY!!!!!

But wait.  I had made Big Boss promise he’d take me sometime during the weekend.  Hmmm.  What to do. What to do. Should I go alone?  I mean, I was there with $$ in hand, my phone was fully charged (so I could text friends and tell them I was seated and ready to watch The Movie)  and I had time to make the movie.

I thought.  And I argued with myself.  And I debated.  And I called Big Boss to tell him not to worry about taking me to the movie later. I would do him a huge favor and just go already.  He laughed.  Actually, what I said was, “Would it hurt your feelings too much if I just go?” He laughed.  I said I’d wait if I needed to.  After all, what was one…or two more days?  He laughed.

I ran to the ticket booth hoping I wasn’t too late to get a ticket before they sold out that particular showing.  But wait, there was no line. Once I collapsed into the theater seat with buttered popcorn, fashionable 3D glasses and a Coke in hand, I noticed that I was pretty much the only soul there!  Some guy came in later and sat in the back, which made me nervous but I thought surely I would survive…after all, I had just experienced NYC!!!!  🙂

And so, I waited for the ENDLESS, silly, aggravating messages from the theater on screen.  And I endured the exasperating trailers that went on FOREVER.  Come on people!  I’ve been waiting for this for 2 stinkin’ years!!

Ahh, the music finally started.  I quit breathing.  And then there it was in all of its 3D glory!! No, I did not scream.  I don’t think.  I did breathe a soft “yeeeesssss”.

Side note:  I asked the movie manager about the 48 HFR.  As in, was it being shown in that particular mode?  I might as well have been speaking Latin.  He was clueless. Seriously. I’m pretty sure that the closest theater showing it in 48 HFR 3D is 120 miles away.  Crud.

So there I am, munching on popcorn, sipping Coke, turning my phone to “vibrate”, texting “Guess where I am?!!” to Hobbity dudettes and keeping a close eye on The Lone Guy in the back.

To be honest…the first hour, my inner fan was screaming, “oh lordy, this is slooooooow!” and “I so hope this picks up soon.”

I hated the Orcs but I hated them in LofR..they scared the whammy out of me. No, they creeped me out completely. I am a fragile soul and the horrendous images of the Orcs made me shut my eyes so I didn’t dream about them.  Really.  Can’t take it.  I had to quit reading the Left Behind series for the same reason…nightmares.

Same deal with the goblins except that they were just gross…and that scene around the campfire went on and on.  I kept thinking they were going to break out singing “99 Bottles of Beer on the Wall” at some point.

The riddle scene with Gollum and Bilbo went on too long but I’m pretty sure Sir Peter was spreading the scene out for time value?! No big deal. Gollum is just as creepy as I remembered him from LofR.  Creepier.

Gandalf was his usual wise self and was played excellently by Ian McKellen.

And when, in that first hour, things seem to go at a turtle’s pace, the music lifted me right along!  Mr. Shore did it again.  Middle Earth came alive with his music!

The first high point? When the dwarf company, led by their leader, Thorin sang their “Misty Mountain” song.  After two years of waiting to hear AND see them perform this tune, well, it was cool! BUT…I wished they had sung it around a campfire maybe as they were marching off into the gorgeous New Zealand mountains!  I concur with Frenz’s SO’s evaluation that it was too much singing at one time.  Just sayin’.  But I love that song and that the words are straight out of Mr. Tolkien’s book!! Yes, that makes me a geek.

I loved, loved the dwarves. And I’m sorry, but Mr. Adam Brown was just too cute. He’s my newest crush! The line about not liking green food was precious. And of course when Dwalin/Graham McTavish said “Where’s the meat?!”, I knew Dwalin was OK!! Any dwarf that wants meat is my kind of dwarf!!!

Bilbo was played well by Mr. Freeman. I had no idea what to expect out of him but I found myself really liking his character portrayal. A lot.

The next high point was the stone mountains throwing rocks at each other!  For some reason, that just tickled me.  But I really did loved the way they just sort of oozed out of the mountain!  Mr. Jackson knows his stuff huh? How the Dwarf Company survived is beyond me, but by this point, I will believe anything!!  🙂

I was mightily surprised how the flaming pine tree scene was handled.  It truly got the adrenalin going.  I didn’t see it coming when Thorin marched right off that burning tree and decided he was going whip some orc butt come you know what or highwater!

The drama of the ensuing battle was…well, dramatic!  But the eagles flying in to save the day was just WOW!  It was more moving than the eagle rescue at the end of The Return of the King!

I totally get what someone said while watching Richard Armitage in his first scene as Thorin Oakenshield…it was like watching your kid star in the school play and you just prayed he didn’t forget his lines or overact or…well you know.  No disappointment AT ALL.  The man can act…altho I didn’t really think he had all that many lines.(yes, that sounded like a stage mother!)  I’m guessing his presence will surely increase in the following movies?

I left the theater satisfied…that the movie was good, that it lived up to the hype surrounding it, that I had spent my time well and that it was going to be long nuther year until….The Desolation of Smaug!

Now if I can just get BB to go see The Hobbit!!  so he can give us his opinion.  Don’t hold your breath.