Heck if I can figure out what to call this old, old, OLD recipe of mine.  I got the original out a cookbook called “Typically Texas” collected by the Rural Electric Coo-op members published in the early ’70s.  It is a GREAT cookbook.  I’ve dog-eared the thing so many times it’s hard to tell what’s NOT dog-eared.  And the plastic binder is 3/4 gone.  Sooner or later, I’m going to have to figure out how I’m going to hold the thing together.

I had sort of forgotten about this recipe until a son called last week for the recipe. “Mom, remember those hamburger things you used to make?” and from there, I started giving him directions.  This was a cheap supper for us and relatively fast, as we always had hamburger on hand.  Onions were a staple as was the cream of mushroom soup.  I always had the ingredients for this dish!

I had planned to make this for our lunch today, but Big Boss came barreling through 45 minutes early announcing he had to eat immediately as he had a 12:00 commitment.  So while I finished up this recipe, he ate oatmeal and a cinnamon roll.  He’ll have hamburgers with gravy tonight. Or tomorrow.

Like I said…I think…I based this on a recipe in the cookbook called “Hamburger Supreme”.  I’ve changed it some through the years. 🙂

Hamburger Whatever You Want to Call IT!

2 medium onions, chopped up finely (I use 1/2 of a large yellow onion and the finer you cut the onions up, the easier it will be to make the patties.)

1 teaspoon each, salt and pepper 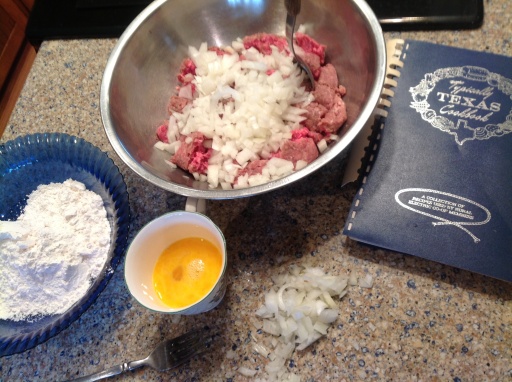 Heat 1/4 cup cooking oil (I use canola or corn.  Olive oil burns too easily so forget that.) in a skillet…cast iron or electric. Set on a medium-high temp.

Note: I use a my ancient 12″ Farberware electric skillet. It has been my trusted friend and kitchen aid for 40 years. Take my first-born but keep your grimy hands off my skillet! I spent several summers cooking with nothing but it and a pressure cooker. We were living in small rentals during our summers at the farm and it got hot. Real hot. I did anything to not add to that horrid heat. So I cooked nearly everything in the electric skillet with the exception of veggies out of our garden. Those went into my pressure cooker…a small one that would cook most veggies in 3 mins. Just what the doctor ordered!!

OK, after that dissertation, I’m lost…

Combine all of the above in large bowl and mix with hands. Form 1/2″ thick patties. I get 7 out of 2 lbs. hamburger.

In a medium size bowl, measure in about 1 cup+ all-purpose flour. Coat each side of the patties in the flour and place into hot oil.

Brown each side and when done, place on a paper towel lined plate.

Pour off all but about 4 Tablespoons of fat.  Add, 2 Tablespoons of flour, salt and pepper and mix well.  Add 1 cup of milk slowly stirring constantly, then add 1 can cream of mushroom soup.  Heat at medium temp and stir until blended.  But lumpy gravy is acceptable for this recipe!

Return the patties into the skillet, turning to coat both sides with gravy.  Put a lid on the skillet and continue to cook at a very low temp for 15 mins.  Be careful heating as to not scorch the gravy.

Another variation is to sauté fresh mushrooms to add to the gravy.

Fresh green beans or brocolli go great with this.