Bunnies in the Grass: An Easter Cake

First round of bunnies

Want a Halloween version of this cake?  Well, HERE ya go!

I’ve been experimenting today with inspiration from the Pigs in the Mud cake…actually tonight.  I had a 6″ cake in the freezer by chance and I had leftover icing that would work for what I had in mind.  So around 7:00, I started in.

I had purchased some candy yesterday in hope that I could get some work done on this project.  I bought White Marshmallow Bunnies made by Peeps…the come 3 to a package and were around $1 for each package.  I used 10. 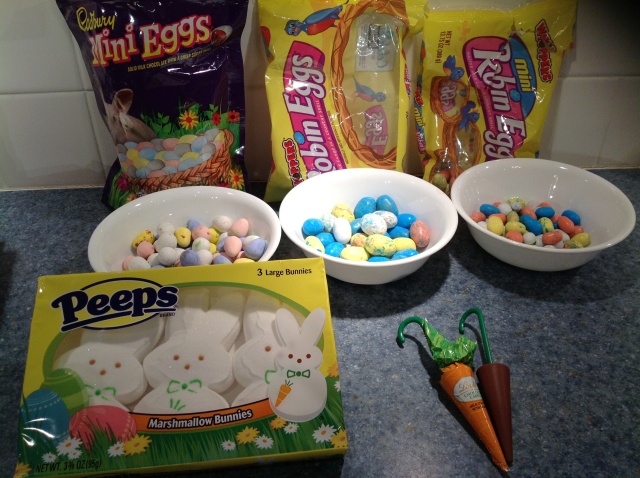 Also, I got a 13 oz. package of Robin Eggs by Whoppers and Mini Robin Eggs. These are malted milk candies and were bright colors.  They were around $1.50? a package.

Cadbury  Mini Eggs rounded up my shopping spree in pastels.  They cost more but were good.  Really good. 🙂 It was a 31 oz. package which means you have plenty left over for grandkids!

I also found some Lindt chocolate carrots.  They were 3 to a package and solid milk chocolate.  They were wrapped in orange foil with green tops but once unwrapped, were, of course, chocolate.  The only thing I could think of would be to melt white chocolate, tint it orange and dip the chocolate in the mixture. They are cute though and you know they HAVE to be good if they’re Lindt!!

OK, so I had my candy, my icing was room temp and the cake was still frozen.  It was a white cake BTW.

I put the 2 layers together with frosting in between and then smoothed frosting around the sides that I had tinted pinkish lavender. BTW, the cake was a little too tall, so I cut off about 3/4″ so the bunny ears would be taller than the cake.  I put green frosting on the top  then tinted some coconut green and sprinkled it on top.

Then I lined the white bunnies up and put a dollop of pink icing on the back, about halfway up and stuck onto the side of the cake and repeated that procedure until I had bunnies ear to ear all around.  The last one got surgery as he was bit too chubby to fit in the space left for him.  I just got the scissors and clipped off a bit here and there. 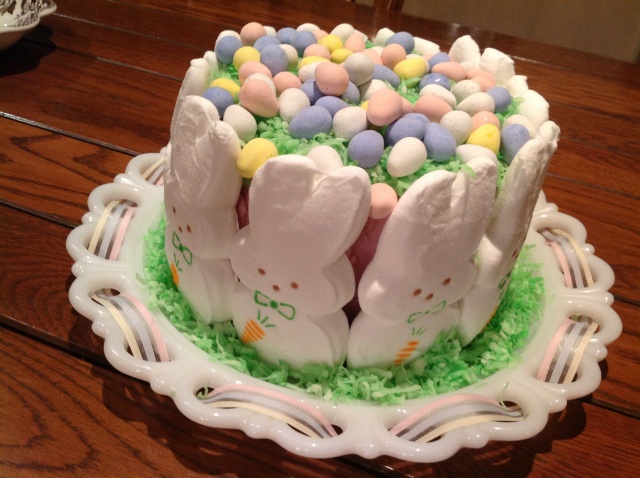 I then piled eggs on the top, sprinkle eggs around the bottom and was done.  For the second picture, I took the eggs off and used the leftover coconut grass.  Ribbon can be woven around my cake plate to add a bit of color or you could tie it at the base of the bunnies’ feet. 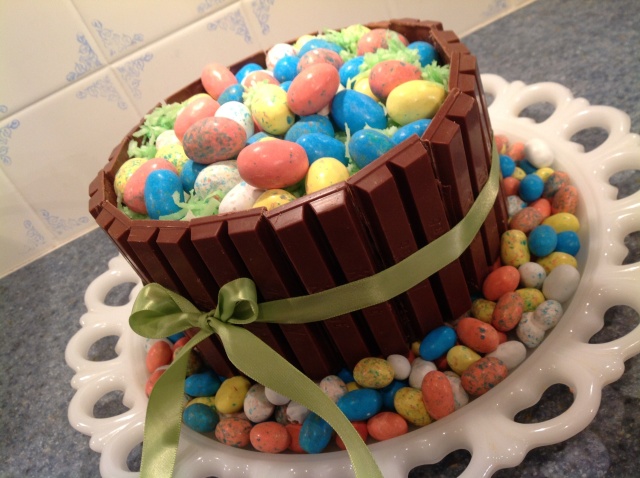 For the second cake…I took off all over icing first and then coated the sides with chocolate frosting and smoothed it a bit.  I used leftover green frosting for the top again but waited to put the coconut on the top.

The Kit Kats have 4 sticks to a bar so those have to be cut in half so there are only 2 sticks to put up at a time.  If you’ll cut the sticks in half with a sharp knife, you’ll get a nice smooth edge, rather than breaking them in half. You can also cut off jagged chocolate very easily to smooth them.  Then pop them into the freezer for a few minutes as this makes them easier to handle when applying them to the cake. I used 4 of the extra large Kit Kat packages.

Dab some of the chocolate frosting on the back of the double sticks and place onto the cake, pushing gently to make sure they adhere well.  Then tie a ribbon around the middle of the bars to hold them in place.

Then I piled more green coconut grass on to the top and piled the Whopper eggs on top of that.  I sprinkled the mini Robin Eggs around the bottom.  My ribbons didn’t match very well but they were as close as I could get with what I had on hand.

You can use can icing or any favorite frosting recipe you might prefer.  I used a buttercream that I use on my decorated cakes.

While shopping for candy Easter eggs, I discovered that there are at least a kazillion kinds in the stores.  There are white chocolate bunnies, there are cookies and cream bunnies…jelly bean eggs, wrapped chocolate eggs…it goes on and on.  Also found the white chocolate Kit Kats at Walgreen’s and Wal Mart.

I’d like to add flowers but haven’t time to make them yet but you can get some decent premade flowers in Hobby Lobby and Wal Mart.

As I come up on candies that might be used, I’ll post them.  I have to take a son to the airport in the morning so I’ll do some more looking.

If any of you do some experimenting, send me photos of your artwork and I’ll post them here! thequeen612@yahoo.com

12 Responses to Bunnies in the Grass: An Easter Cake