Sentinels of the Prairie

For comparison, this is the same shot on a clear day: 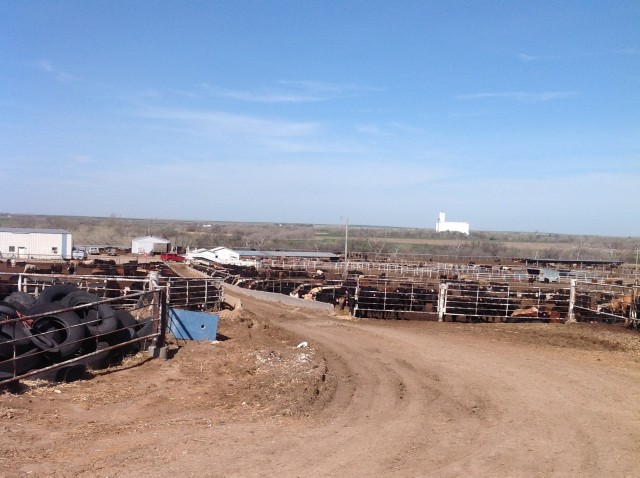 Big Boss took the first photo pic early one Sunday morning a couple of weeks ago.  He was feeding and looked up and all he could see was the Co-op elevator head house* that appeared to be floating in the air thanks to a heavy fog that particular cold morning.

*For those of you in Rio Lindo, an elevator in this particular geographic situation is not one that people go up and down buildings in.  Elevators here are where grains are stored as in corn, wheat, milo, etc.  Here, they are the hub of a town.  During wheat harvest, you avoid that part of town like the plague!  Traffic jams everywhere.  (Does that make you city folks laugh?)  All I can say is, if you want to avoid getting run over, stay. Away.

The head house is the control center for the whole shebang, more or less.  It’s full of electronics, pulleys, buttons, levers…you know, that kind of stuff. Having never been up in the head house and with absolutely NO desire to be that high, I’ll just take Big Boss’s word on this one. Although the view up there has to be stupendous.  But not worth me passing out on the way up!

You have to look close though.  See the cattle and the pens?  Now normally, there are trees and creek behind them, which you can see here. But,  beyond them are more fields and then the little town. All of that is blocked by the fog.  There’s a little white square dead center. I fiddled with the pic a bit to make the white blob clearer.

Big Boss said this happens just two or three times a year.  You look out toward town when there’s fog and all you can see is that white top sticking up.  Cool!!

By the way…”Sentinels of the Prairie” is how grain elevators are lovingly referred to around here.  Think you’re lost out here?  Nope.  Just look on the horizon for the next town’s elevator and head in that general direction.  Chances are that when you arrive, obviously lost, the Co-op folks will hand you a cold Coke, ask you where you’re from and give you directions…and ask if you need gas.  In these parts, a full tank in your vehicle is ALWAYS a good idea because if you’re headed west, the next town could be 60 miles down the road. And a sudden fog could overtake you. Or a blizzard. Or a tornado.   Gotta love living out in the wide, open spaces!!  🙂

2 Responses to Sentinels of the Prairie