Notes from an Almost Queen for a Day

Ahhh, the winning ticket…could you believe it.  Me?  Winning a Front of the Line Pass? 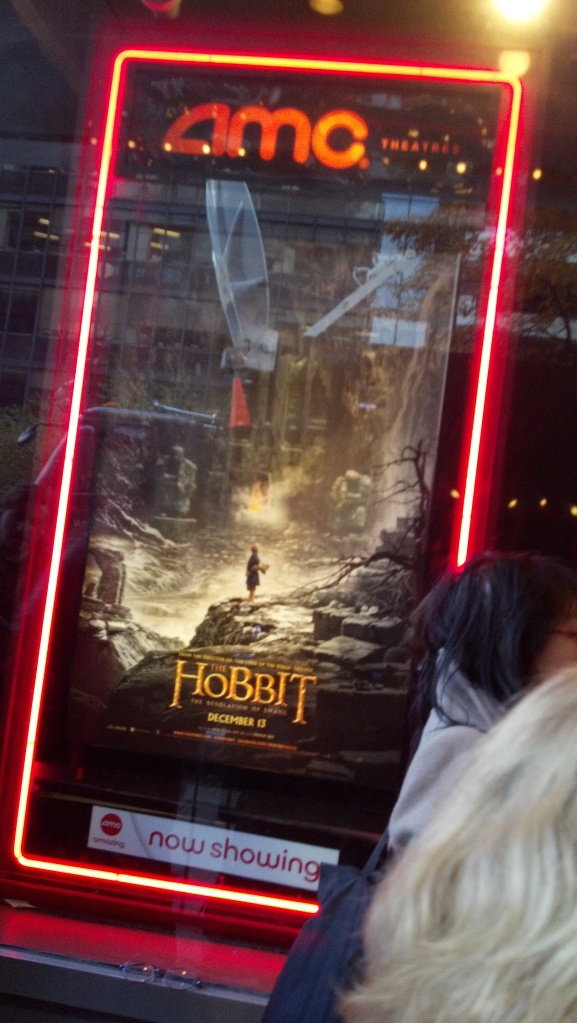 The poster for The Hobbit: The Desolation of Smaug.

But the reality was…I was ignorant.  Just what did “Front of the Line” mean?   So I wrote the lovely Warner Brothers lady, Alicia, who had contacted me and asked, “Won’t folks throw things at me if I go to the front of the line?”  How rude would that be?

Nope, she said.  There will be “people” there to guide you and/or separate lines.  So that answered two questions.  I would be safe and would not be alone.  Yay!

So I called my New York hostess and said, “Guess what just happened and I get two passes so that means…?” as my hubby drove me to my departure city. She could not believe it.

I called another pal and said, “I’m sending you my correspondence with Warner Brothers.  Is this legit?”  In other words, being the jaded Texan that I am, I was suspicious.

Did someone want to lure an unsuspecting farm wife to The Big City for some awful end? But she assured me it was real.

OK.  This all was getting really unreal but I could handle it.

My trip to visit a pal in New York was turning into a mystery/adventure.

The next morning, I bid adieu to Big Boss, who thanked his lucky stars he wasn’t going also.  Oh, he would have loved visiting my pal and her husband as we all had a blast when they visited us two years earlier.  But The Big City thing totally freaked him out.  Completely. As I raced towards security, Big Boss watched me.  A little lady walked over next to him and asked, as his eyes followed me, “Is she fragile?”  Bwahaha!!!! What a sweetheart!  He told her, “Lady, that woman could beat a bear to death with a switch.  She’ll be fine.”  Actually, he was just worried where his next meal was coming from EVEN THOUGH I had spent hours cooking up all kinds of food for him to graze on in my absence.

My planes were on time, as my hostess was and we had a joyful reunion followed by a quick trip to her house for a wonderful Italian supper and Yankee greetings from her hubby….who, by the way, has a delightful Long Island brogue/accent that just annihilates me!!  And people think I tawk funny…

Next day was church and a drive through ….no , around the Finger Lakes .

Lovely Friend made reservations at The Wellington Hotel as per my lovely friend in Texas  had recommended  (thanks Melinda!   You rock!). She also determined that would DRIVE….in a car….into The City.  No problem.

I asked for a blankie and told her I would buckle up in the back seat with the blankie over my head. After all, I had SEEN New York City traffic from the vantage point of a white-knuckle cab ride in which I was sure I was going to meet my Maker at any second. Just shoot me.

My sweet friend who shall be known as Pat from here out, laughed in the face of danger, printed out exact directions from Google and asked me to plot our path on my trusty Edna, otherwise known as my smart (most of the time) phone navigational app.

We were ready for anything. Our path was plotted, our hotel reservations were made, our passes were printed out (at long last), our bags were packed and our prayers were said/being said/unfailingly repeated many times for travel protection.  Also for protection from bad guys (for last year’s bad guys, click HERE) accidents that might hinder our schedule, sickness, bad knees…well, pretty much anything that might be conceived as being negative.

Her Yankee husband waved us off the next morning in the wee hours and we were OFF!

Can you believe this?  WE WENT STRAIGHT TO THE HOTEL!!!!  Not a wrong turn, not a wrong lane, no detours and we didn’t run out of gas.  We just drove smack dab front and center in front of the hotel, parked and waited for a valet to park it somewhere unknown, unseen and mysterious…to a flatlander anyways.

We entered the hotel like it was something we do every day.  You know…knee boots, sunglasses, skinny jeans…ok, that’s pushing it a bit.  The jeans weren’t so skinny. Granted, I almost had a heart attack opening the car door to get out as cars whizzed past us, horns honked and my luggage increased in weight by a ton.  But we got through the doors and we were registered.  Zip, zap, easy peasy. Only our room wasn’t ready yet and we needed to leave within the hour.

But wait… Meemaw hadn’t painted the barn yet.  Not sure why but I was sure I’d have time to pull myself together and throw on a bit of makeup in our room.  Not.  The hotel ladies’ room sufficed even if I had to share it with two hotel maids and a mommy with two little girls.  Hey.  They thought my jeans were cool.  My self-esteem zoomed.  I had cool jeans.  Think about it.

Anyway….am I dragging this out too much?

Pat and I walked to the AMC Loews Theater and looked nervously around.  We were the only ones there besides employees.  Were we too early and too anxious?  Was there just going to be a handful of folks to show up for this gig?  Were we at the right place? WHAT were we getting into?  We had no idea.

Yep. Nope. Yep. We were early so we ran in with our sub sandwiches and asked if we could sit down somewhere for our lunch.  Thirty minutes passed as we leisurely chowed down.  When we went back down to the lobby there were people. Everywhere.  Lots of them.

Remember Pat’s sister’s verbage… “Did you feel that?  God just gave us a kiss.” Yep, we had been blessed again.

Is this too detailed?  Too much “blow-by-blow”?  Am I stringing y’all along long enough?  Laying it on a bit too thick?  Too. Texas. Tough.  🙂

12 Responses to Notes from an Almost Queen for a Day