A Tree Choir for Miz Fancy Nancy and Miz Scarlett

As requested…and promised…I now give you my Christmas Tree Chorus. 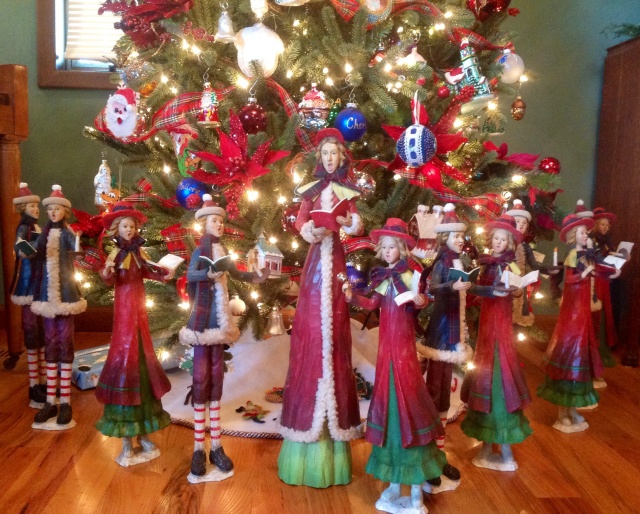 They are a tall, straight lot but man can they sing!!  🙂

I found this great group last December.  I had taken our matriarch, Mother, back home after spending a week with us on the farm during the Christmas holidays.  With an ongoing invitation from Miz Scarlett to come for a visit in the Metroplex, I headed north after a few days in my hometown…with Edna aka my cell GPS charged, plugged in to the pickup’s sound system and set for Miz Scarlett’s address.  Thirty years ago I never minded big city traffic.  Now. I. Do!!!  I mind it a lot.

But I arrived safely and timely.  Since my longtime best bud from childhood also lived in the vicinity, we all decided to meet up.  Thus Miz Fancy Nancy and Miz Scarlett met and became instant friends.  What can I say?  I have good taste in picking friends!  Or maybe they have good taste?  Just kidding. But we had so much fun!!

Anyways, Miz FN took us to all of her favorite haunts, one of which was a leftover gift shop…that’s the best way I can describe it.  Huge building chock full of Christmas stuff!

Since FN and I spent 3/4 of our childhood and teen years singing together and playing the piano together, we share a love of music.  Well, so does Miz Scarlett but her tastes veer to the country/western side severely.  (I’m doing my best to widen her horizons in musical choices but it’s not taking!)

All that said, FN found the cutest little carolers in the process of browsing through the shop AND they were 75% off which equaled about $3 a piece.  “Oh think of what we could do with those!!”, FN exclaimed.  I laughed and said, “Yeah, I could make a whole choir of them if I got one for each grand.”  GREAT IDEA!! was what I heard from the peanut gallery.

And so…after promising myself that I was NOT buying any more Christmas stuff EVER, I walked out with 11 little singers and even a choir director.  We searched for 30 minutes for the choir directors’s male assistant to sub in for Big Boss, but alas, no hubs was found for Miz Directoress.

The entire group was stored in my basement until last week, when I finally unpacked them.  My arrangement of them isn’t very creative but it was the best I could do this year.  To make it more realistic, I have a speaker behind them that will play music from my iPad or phone.  Cool!

Now..to get some cooking done!!

This entry was posted in holidays and tagged carolers, Christmas tree, decorations, ornaments. Bookmark the permalink.