Big Boss forwarded Ravi Zacharias’ Christmas message to me yesterday. We are both huge fans of Ravi Zacharias and consider him to be the foremost Christian apologist in today’s world. We have heard him speak in person several times and had the opportunity to meet this wise, wise man.

It all started by listening to a radio program in the car. I came home and told BB he needed to see if he could catch this guy’s program. When we finally found him on our local Christian radio station, it was highly inconvenient programming as it aired during our church services!Eventually, “Let My People Think” was moved to another time slot and we rarely missed a broadcast.

Zacharias spoke especially to BB because he has long-held the theory that very few people think…the deep kind of thinking. The kind that asks questions, sometimes comes up with answers and prompts research…not just taking someone’s word.

He could listen to Zacharias and John MacArthur…Michael Youssef…all in his feedtruck. Or in the high loader. Or in the tractor, combine, cutter…wherever he might land.

So, when we got wind that he was going to be at the next Truth Project seminar, we jumped at the chance to hear him speak. I have to say that while his Indian accent is addicting, his messages are even more so!

Of course, now, we can just go to his website http://www.rzim.org and listen in. Our library now includes his books, DVDs, tapes and CDs.

On the remote change that you’ve never heard of Zacharias, here’s your chance! I love this year’s Christmas message! It so timely and so needed!

A Moment in Eternity

Early in December, I was enjoying breakfast with a fine Christian businessman from another country who, in his travels, covers several continents. One of his biggest questions was, “How does one do business in a society where corruption is the defining reality?” As we were talking, I couldn’t help but notice that the music playing in the background was “Hark! the herald angels sing, ‘Glory to the newborn King.’”

We were not in the West. This was a Middle Eastern country, a city with a futuristic skyline almost brash in its opulence and pomp, with pictures of sheikhs in their palaces lining the hotel walls. Boasting the tallest building in the world, the largest indoor ski slopes, seven-star hotels with rows of Rolls Royces parked in front to stun the eyes—a country dripping wealth all around, a city that is a commercial capital, and the envy of the world. It is not straining the description to say it had all the marks of the modern tower of Babel. But there was no mistaking by the décor that this was Christmas. 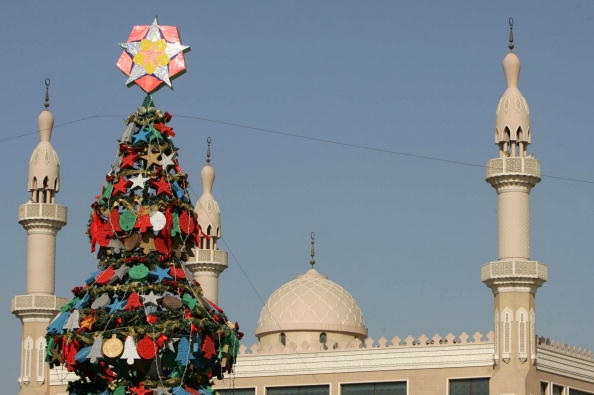 (A mosque in Dubai  decorated for Christmas. Photo courtesy of RZMI)

In fact, as I write, I am in the largest Muslim country in the world, yet, everywhere there are Christmas decorations, the strains of Christmas carols in the malls and elevators, and the hotel staff wishing me a “Merry Christmas.” It’s Christmas in Indonesia. If you were in the UAE, Indonesia, even Syria, you would see the same thing and hear the same Christmas carols in the hotels and malls. Ironically, on the news this very week is a story of a school in a town in Texas that sent a letter to parents of students informing them there was a ban on children wearing red or green for their “holiday party”; apparently, red and green “send the wrong message.” This is incredible! It actually took an action of the City Council to override this ludicrous prohibition. Imagine such presumption! It’s not enough to prohibit the message of Christmas; now it is forbidden even to wear the traditional colors associated with Christmas. Undoubtedly, wearing red or green to school at Christmas violates the separation of church and state doctrine. I’m surprised they have allowed traffic lights to function at Christmas. Is the day far off when censors might wish to scan our brains as we enter a school in case we smuggle the “illicit” Christmas story past the main entrance? Perhaps we’ll need two lines of detectors, one checking for weapons and the other for thoughts of Jesus’s birth. This is the new America of tolerance, another vacuous word defined by relativists whose only absolutes are the denial of any other reality except their own.

I ponder, I wonder, I move from the emotions of strained credulity to recognizing that this is the logical outworking of atheism and the illusion of neutrality: when man becomes God, the body becomes the soul and time becomes eternity. These are the challenges we face in our times.

But then I think of that extraordinary verse in Isaiah 9:6, “For to us a child is born, to us a Son is given.” Let us be sure of what is being said here. The Son is not born; the Son eternally existed and is given. The Child is born and entered our time. He who dwells in the realm of eternity entered time. He understands our times. And so it is that eternity breaks into time to give us a glimpse of what always was and is and will be. God in that divine moment revealed Himself as He had never been revealed before, through His Son. That is what the Christmas message was about and is about. Who were the ones to be told? First Mary, then Joseph, the shepherds, and then the rulers: From the confines of a simple home to the palatial structures of rulers and to the work place of those whose lives intersected the work-a-day world, the very ones who raised lambs prepared for the ceremony of communion with God.

Every facet of our lives is covered in the story. The gifts that were given by the wise men represent our common experiences: gold (representing our riches), frankincense (our worship), and myrrh (our bitter suffering). In one person, the king, the priest, the Savior came to earth. Eternity’s anvil was provided against which the hammers of time must find their meaning. What more important message could there be than that there is a Savior who is the only hope for the corruption that is in all of our hearts?

In Dubai, where gold is carried into the shops in wheelbarrows, where countless minarets regularly sound forth a call to prayer as a means to an end, where wheeling and dealing is a fact of life and fears lurk of the next terrorist scheme planned nearby, the joyous Christmas message of the Savior is everywhere. In America, whose constitution is based in the Judeo-Christian worldview, our youth need metal detectors to enter schools and the same message of redemption is deemed dangerous. Our hearts need to be changed and only God is big enough for that. The Son comes to offer his redemption, hope, peace, and joy to every nation and to every sector of life, if only we would see the simplicity and sublimity of his visitation. At Christmas, time was interrupted by eternity’s angelic announcement: the call of the miraculous entering the mundane and the monotonous, the pure calling to our impurity, the power to change appealing to our intransigence. It is the miracle that is needed to change our world and the real “star story” of the greatest visitation of all else we slide down the misery scale into the fake world of towers and multiple-star hotels.

This is the time to especially invite your international friends into your homes. Let them hear the story in word and in song. They respect a festival and celebration. Let them experience the story of the Word becoming flesh and dwelling among us, full of grace and truth.

Born to raise the sons of earth,

Born to give them second birth.

In India, Christmas is called “Bada Din.” It literally means The Big Day. Isn’t it fascinating that in a land rife with religion and spirituality the one day out of all the celebrations and festivals that is called The Big Day is the day when the child was born and the Son was given? Skeptics and mockers are still with us, dreaming about the cities of men without the message of the Savior. Chesterton said it well, “Truth will always be stranger than fiction because we have made fiction to suit ourselves.” And so I listen again to the earth-shaking message of that beautiful carol:

“Glory to the new-born king,

peace on earth and mercy mild,

I am never one to correct a lyricist because poetic license is legitimate to the world of rhyme. But if I were to suggest an amendment, it would be:

Rhyme and reason come together in time when eternity sounds its music. The colors of Christmas may be banned but the Christian hymn writer George Wade Robinson trumps once again:

Heav’n above is softer blue,

Earth around is sweeter green;

Something lives in every hue

Since I know, as now I know,

Spread the word. It is the heart that sees the hues … and that can never be banned. “Merry Christmas” to all of you, our friends and supporters. Thank you for a blessed year. We pray God’s blessing on you in the year ahead.

I would be remiss if I didn’t say that for some, this has also been a year of the loss of a loved one who left time to enter eternity. I know that because some were very dear friends to me. I already miss them. May our Lord cushion that blow till we enter his presence when He will shine a new light and those losses will be seen as precious treasures, yea, the ultimate heralds that make up the City of God.

1 Response to A Christmas Message…Ravi Zacharias