I’ve been on a “fort” jag lately.  I’m pretty sure that the subject has been with me for long time though.  First there was our house, built in 1979-80.  The architecture and layout were similar to a doctor’s house in my hometown. Ours, however, was built with rocks from our pastures instead of bricks.   Basically, we wanted our new home to look old.  Really, really old.  Like it had always been here. Like it had just risen up from the dirt and rocks.  Like it…belonged.

Our home ended up looking like a fort , we discovered, on a visit 20 some odd years later, to Fort Fisher in Waco, Texas.  Fort Fisher, in fact, was not the usual fort as it was more of a gathering place for Texas Rangers.  We thought that was pretty cool!

In the meantime here in Kansas, the museum for Fort Larned was built and lo and behold, it resembled our home heavily…along with the officer’s quarters that had been restored nearby.  Actually, Fort Larned is a federal fort and is an outstanding example of historical restoration.  We’ve visited it several times and have 5 more grandkids to take in the future.

After  discovering Fort Chadbourne back in January, I decided it was high time I visited other forts. With several of these forts following the highway we’ve driven for the last 45 years between Kansas and Texas, it wasn’t far off my usual route to find Fort Griffin.  I’ve probably driven right past it many times, blissfully unaware and driving on a schedule with 3 kids in the backseat.

Now…think West Texas…mesquite trees…cattle…cactus…tanks aka ponds…throw in some hills and a river.   And that lands you right off US 283, halfway between Throckmorton and Albany, at Fort Griffin State Park.

While the Visitor’s Center doesn’t exactly blend in with the landscape, it’s a treasure trove on the prairie!

I was met by Jane, the center’s administrator/greeter and I suspect any other job that needs to be done at the fort!  She was beyond helpful and knew her subject well. I shared the sketch of Fort Griffin from my Texas Sketchbook by E. M. Schiwetz as we browsed her book collection.  As usual, I walked out with three new books.  I cannot resist an interesting book.  It’s my one weakness…

The actual fort buildings/ruins are stone with reconstructed replicas of the wood frame buildings spread out like a quilt over the vast West Texas prairie.  I would imagine that about right now, the wild flowers are beginning to make their grand entrance to perk things up a tad!!

Fort Griffin, built in 1867 and one of Texas’ nine western frontier forts, was an important part of area cattlemen’s lives and their families. It served as protection from Indian attacks and was a social gathering spot for the locals who came 30-50 miles for dance or political meeting. The sutler’s building sold supplies to ranchers and travellers and housed travellers of all sorts, schools were held within the fort for soldiers’ and rancher’s children…in other words, this particular fort, for a short period of time, was integral to the survival of West Texas settlers, migrants and wagon trains.

The Fort itself is mentioned over and over throughout the book Interwoven by Sallie Reynolds Matthews. Mrs. Matthews mentions Fort Griffin nearly as often as she does the several ranch homes she lived in through her life.  Fort Griffin was essentially a life saver for ranchers who lived so far out in the sticks, they’d have to wait two weeks beyond the rest of the world for Christmas.  Almost. 🙂 The remoteness those early ranchers and settlers felt must have been overwhelming at times! 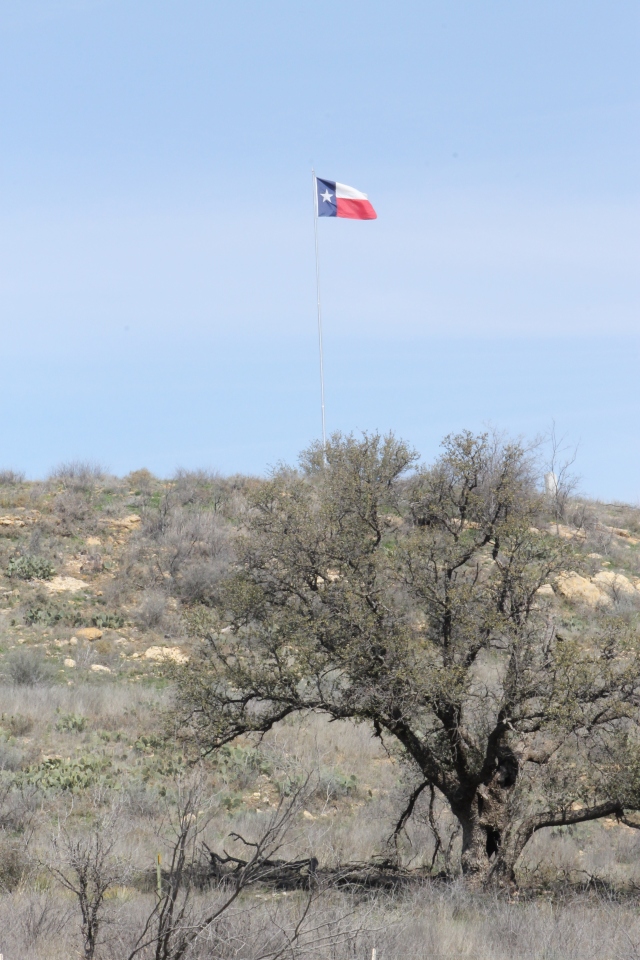 Looking up from the highway to the bluff

The fort itself sits on a rugged bluff that overlooks the Clear Fork Brazos river and the ghost town of Griffin aka The Flats, which now serves as an outstanding state campground and park.

Do yourself a favor and plan a trip to this fort and perhaps the other eight in the area! I’ve only hit highlights of the rich history of these outposts but take my word for it…they are all bursting with stories, legends and information.