The Tale of the Red Malibu-Take 2

Note: This is a repost…originally from 2012. In honor Big Boss’es 65th birthday and our 44th anniversary, I give you The Red Malibu.

We were still in college, dating and madly in love.  He called me long distance that summer weekend with a one huge question.  (No, he had already asked that question, unofficially.  The ring day hadn’t happened yet. )

He was going to order a new car and wanted to know what color of interior to get.  I said, “Well surely NOT black again.  Black plastic is hot.  Really really hot in Texas summer heat.  Especially with no air conditioning.  And white would be a nightmare to keep clean.  How about red to match the car?”

After a long pause in which I’m sure he was wondering what he had got himself in to, he offered, “Nope, they don’t make red.”

Puzzled as to what in world could possibly make gold not work as a car interior color, he replied with, “Why not?”

“I don’t know. I just know it doesn’t work with red.” and I sighed and told him to just order whatever he wanted because, after all, it was his car. So he did.

WHAT was he thinking?  He drove up in red car with gold interior  a couple of months later.  He was enthralled with that car.  And it had gold interior.

It got great gas mileage and handled like a dream.  Even if it had gold interior.

I had to admit that the exterior was dynamic!  But it had….gold interior.

I tried to hide my aggravation that turned into disgust and then dismay and finally embarrassment.  GOLD INTERIOR?!!!!  WHAT was he thinking?

But the red Malibu-with-the-gold-interior became our honeymoon car. I lived with it.

We were running to the car in hopes of escaping fast to enough to avoid decorations on that new red car by our college friends. 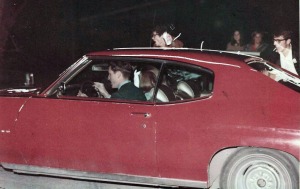 And 2 years later, it took two of us to the hospital for the delivery our first baby and brought three of us home.  Safely!

It really was a good car, even tho…well, you know.  But the 2 door aspect of it was a problem for a couple with a baby.  It was hard to get the car seat in and out and the baby too.  Squenching up to get into the back seat was difficult too because of all the baby paraphernalia that was in the back seat.  You sort of had to roll into a ball and then hurl yourself to a vacant spot back there.  And hope that you fit.

So the sad day came when the red car-with-the-gold-interior was traded in for a Mercury station wagon.  Woohooo!  We we in the big time then!!  All the room in the world for baby, portable bed, diaper bags, toys, car seat, baby swings, baby walkers, strollers….the usual stuff.

I’m pretty sure I did a little Baptist dance when the red car was no more.  And I’m just as sure that it was a hugely sad day for Big Boss.  He loved that car.

And then, 6 years later, we moved back to the farm.  A friend of BB’s said that they thought they had seen the red Malibu driving down the road.  NO way!!!  But sure enough, a neighbor down the road had bought the car for their high school age son, Derrek.  And baby, could he drive that sweetheart of a car.  Fast!  Furious! Faster!!  Big Boss told me to be careful and look out for that red car on the road.  Made me laugh.

Then Derrek graduated and his little sister got the car.  She drove a little slower and everyone breathed a sigh of relief!!  Then she graduated and took off for sunny California.  With the Red Malibu and the gold interior.

Sadly, the little sister was killed some years later in a car accident and still had the red car in her garage.  So her parents drove to CA and brought the car back to Kansas after her funeral.

We couldn’t believe that the car still existed.  We were sure it had gone to a junkyard a long time ago.  It sat at the parent’s place for a few years.  Until….the son, Derrek, who had owned it after us, took it home for…you guessed it… his son, Aaron.  And they repainted it and put a new motor in it and…it still had gold interior!!!  I was glad it had gold interior!  It made me happy!  The son called us and told us that he and his son had completely restored the red Malibu.

Another few years passed and Derrek’s brother, Lance, (who was in the same class as our middle son and was like one of our own) called and said, “Guess what?! Your car is going to be in town this week!”  We were finally going to get to see our car again!

Now hold on to your hats…it was coming to town to be in a…ready?…. MOVIE!  HERE?!!  In this little bitty town?  A movie?!!!!!  Yep.  The name of it is “Rabid Love” and is a thriller/horror type which I cannot watch if I ever want to sleep again. The movie is set in the mid 1980’s and Lance was helping with the filming.  And he/his nephew Aaron had THE perfect car for the movie, so the car was once again in it’s hometown!  BUT, they needed a place to store the car overnight and wondered if we could put it our garage?

Aaron and his red Malibu-with-the-gold-interior as it appeared in the movie “Rabid Love”, topped off with a vintage 1980’s HHS letter jacket.

Three of our grandchildren were here that night so the excitement ran high as the red car-with-the-gold-ineterior pulled in to our driveway and garage.

Holy Moly!  That car was just as red and shiny as it had been 40 years ago. AND IT STILL HAD GOLD INTERIOR!!

Unfortunately, this the best pic I could take in our dark junky garage.

Aaron had helped his dad meticulouslly restore the car over a long period of time therefore, he drove it to our place very slooowly as he doesn’t like to get it dirty.  He pulled out a rag as soon as he got it parked and dusted it.  I think it has its own dust cover at his house!?  In other words, he is particular about that car.   And I don’t blame him!!!  It’s gorgeous!  Even IF it is a red car-with-gold-interior. 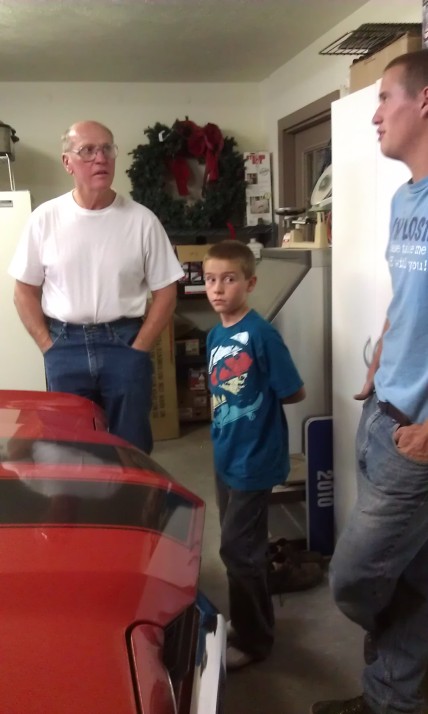 Our grandkids were impressed and Big Boss and Aaron stood and talked about the car like it was a family member.  I’m pretty sure that the next morning when Big Boss went out to the garage he had a little talk with that car before it was gone again.  He loved that gold interior.

2 Responses to The Tale of the Red Malibu-Take 2